Home Politics On Immigration, The Confusion Is Coming From Inside The White House 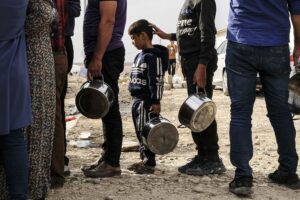 President Joe Biden appears to be confounded by the substance and politics of immigration.

The latest evidence of that is Friday’s laughable-if-it-wasn’t-so-serious White House backtrack of Biden’s walk-back on refugee policy. After promising to raise President Donald Trump’s annual cap on refugee admissions from 15,000 to 62,500, Biden balked Friday morning. Then, under heavy pressure from fellow Democrats — many of whom had described Trump’s policy as racist, xenophobic and un-American — Biden decided Friday afternoon to increase the number of refugees admitted into the country.

How many? “His initial goal of 62,500 seems unlikely,” White House press secretary Jen Psaki said in a statement issued late Friday. The policy, she said, “has been the subject of some confusion.”

That confusion is coming from inside the White House.

It is the result of a much larger conundrum for Biden: finding the safe-harbor spot on immigration that satisfies his base and doesn’t alienate centrist voters. He’ll never win over hard-line conservatives whose views are represented by a new Anglo-Saxon caucus in the House or more temperate conservatives who prioritize restrictive immigration policies.

But even if he doesn’t seek re-election in 2024, he needs both wings of his own coalition to move his agenda and keep Congress in Democratic hands in next year’s midterm elections.

So far, Biden is not just failing to please everyone; he’s having a hard time pleasing anyone. Less than a quarter of adults approve of his handling of immigration at the southern border, according to an Associated Press-NORC Center for Public Affairs Research poll released last week, and the share of Democrats who view illegal immigration as “a major problem” has spiked from 15 percent to 29 percent in the last year, according to the Pew Research Center.