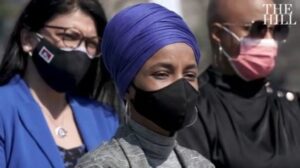 Rep. Ilhan Omar (D-Minn.) is calling on Democratic leaders to disregard a recent ruling by the Senate parliamentarian disallowing prominent immigration reforms — a key element of the Democrats’ $3.5 trillion domestic agenda — to be included in the massive package.

Omar, a member of the informal liberal group known as the “squad,” suggested Monday that the best way to respond to the ruling is simply to ignore it.

“This ruling by the parliamentarian, is only a recommendation. @SenSchumer and the @WhiteHouse can and should ignore it,” Omar tweeted, referring to Senate Majority Leader Charles Schumer (D-N.Y.). “We can’t miss this once in a lifetime opportunity to do the right thing.”

Biden, on the campaign trail, had made immigration reform a major priority after a string of previous administrations have promised — and failed — to overhaul an immigration system that all sides maintain is broken.

As part of the $3.5 trillion spending bill currently moving its way through Congress, Democrats are attempting to do just that. Their package includes provisions providing legal status, and the potential for eventual citizenship, for millions of undocumented immigrants brought to the country as children. The legislation would also provide green cards to other groups of immigrants, including farmworkers and those who have been granted Temporary Protected Status due to perilous conditions in their home countries.

Yet MacDonough found that those policy changes flout the Senate’s reconciliation rules, which Democrats are using to move the $3.5 trillion package without Republican support.

“The policy changes of this proposal far outweigh the budgetary impact scored to it and it is not appropriate for inclusion in reconciliation,” she wrote in the ruling.

By Mike Lillis for THE HILL
Read Full Article HERE