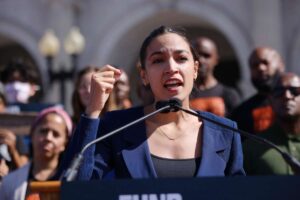 On Monday, Rep. Alexandria Ocasio-Cortez urged for the Democrats’ reconciliation package to include citizenship pathways for immigrants like Dreamers and those in the U.S. under humanitarian visas.

Noting that “countless” constituents who have Temporary Protected Status (TPS) have reached out to her, Ocasio-Cortez said, “I have the privilege of calling these individuals constituents entirely thanks to their courage and determination in risking their lives to escape treacherous conditions of environmental disasters, violence and corruption back home.”

TPS holders are allowed to stay in the U.S. as long as the countries that they immigrate from are deemed too unsafe to return to. There are an estimated over 400,000 TPS holders in the U.S., many of whom are from El Salvador after earthquakes devastated the country’s economy 20 years ago.

Though many TPS holders have been living in the U.S. for decades, their path to citizenship is limited, meaning that they could face deportation if the U.S. deems it safe for them to return to the countries they immigrated from. In June, the Supreme Court handed a major blow to TPS holders and immigrant advocates when it ruled that TPS holders are not all in the country lawfully, severely limiting their ability to apply for permanent residency, or a green card.

As Ocasio-Cortez noted, more than 40,800 TPS holders live in New York. “Today, the U.S. is their only refuge and their only home,” she said. “They have lived in the U.S. for decades, becoming part of the backbone of our local and national economies. While TPS has allowed them to stay in the U.S., it has also put their lives perpetually in limbo, as TPS holders must wait every few months to find out if the program has been renewed.”