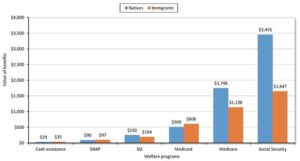 A few years ago I noted that “the amnesty movement has turned the political numbers game into an art form, systematically obscuring the trade-offs inherent in immigration policy.” The movement has reached new heights of obfuscation with Alex Nowrasteh and Robert Orr’s Cato Institute study, “Immigration and the Welfare State.”

Before diving in to that study, keep in mind that on a conceptual level, today’s immigrants are likely to consume more welfare than natives. This is not because immigrants are “lazy” — they actually have impressive employment rates — but because they are poorer and have more children to support. Empirically, the most comprehensive dataset shows that about half of immigrant households are on some form of welfare, versus less than one third of native households. Average benefits received by immigrant households are about 40 percent greater than what native households receive.

The Nowrasteh-Orr study says that’s all wrong. In fact, immigrants receive 39 percent less in welfare benefits than natives on a per capita basis. How is this possible? By including Social Security and Medicare as “welfare,” for starters.

Lumping contributory entitlements with means-tested benefits is incredibly misleading in a group comparison. If I told you that Group A receives more food stamps than Group B, you could infer that a larger proportion of Group A is struggling economically and has turned to the taxpayer for support. By contrast, if I told you that Group X receives bigger Social Security checks than Group Y, then Group X probably earned higher wages, worked longer, contributed more to Social Security, and received a lower return on those contributions. Notice the difference there?