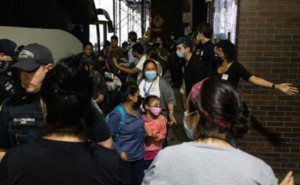 Migrants from Central and South America — many of whom recently arrived to New York City via buses from Texas — should receive fast-tracked work authorization, according to advocates who are calling on the Biden administration to take action.

“The same humanitarian parole and work authorization response that was rightly afforded to Ukrainians and Afghans is needed for asylum seekers in our own hemisphere,” Monsignor Kevin Sullivan, the executive director of Catholic Charities of the Archdiocese of New York City, said at a press conference on Wednesday. His organization is helping migrants with their immigration cases as well as providing food and other necessities to them.

New York’s status as a sanctuary city and one with a mandatory right to shelter has been tested in recent months by politicians from Texas and other border states, who are sending an influx of migrants to the area. As of July, at least 4,000 asylum seekers had entered the city’s already strained shelter system within the last several months.

Migrants from Venezuela and Colombia comprise the majority of recent arrivals to New York, advocates said. Political unrest and violence have marred both countries for years, with Venezuelans’ flight from their home country becoming one of the biggest recent humanitarian crises in the Western Hemisphere. Many, including Venezuelan opposition figures, have relocated to neighboring Colombia.

As of now, the quickest pathway to work authorization would be through Temporary Protected Status, or TPS, which is offered to people from countries earmarked by the Secretary of Homeland Security as experiencing a qualifying conflict or disaster. Those who apply for TPS can simultaneously seek work permits. But Colombian nationals aren’t currently eligible, nor are Venezuelans who arrived in the US after March 8, 2021, per a July update from Department of Homeland Security. The agency didn’t immediately respond to a request for comment.