Home Federal Enforcement “Nothing Is Changing”: Ice Sends Detainees To Irwin Prison Despite Pledges To Close It 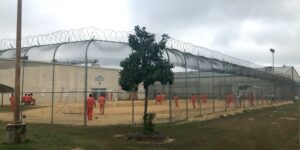 Irwin, an ICE prison plagued by abuse allegations, is at the center of the Biden administration’s promises on detention reform.

DESPITE AN ANNOUNCEMENT that U.S. Immigration and Customs Enforcement’s Irwin County Detention Center could be closed, people continue to be transferred into the detention facility, according to multiple sources interviewed by The Intercept. Last week, at least 34 people were transferred into Irwin from other detention centers, according to advocates on the ground and people detained in the facility, adding to the logistical difficulty of closing it and possibly delaying its shuttering.

Department of Homeland Security Secretary Alejandro Mayorkas recently announced that the agency would be severing its contract with the private prison company that runs Irwin, LaSalle Corrections. The facility in Ocilla, Georgia, had become the subject of controversy and questions about rights abuses after allegations surfaced that detained women underwent unnecessary gynecological procedures — allegations that the orders to shut the facility obliquely mentioned.

“This facility, which has a long and well-documented history of inflicting horrific abuse and neglect on people held there, should be immediately closed once and for all,” said Diego Sánchez, a Georgia-based direct services attorney with Southern Poverty Law Center’s Southeast Immigrant Freedom Initiative. “It is beyond disappointing that nearly two weeks since the directive to close Irwin as soon as possible, ICE continues to confine immigrants at Irwin and other horrific facilities across the country. Enough is enough.”

Whistleblower Dawn Wooten, a former nurse at Irwin, detailed a host of medical abuses to The Intercept last fall, bringing international scrutiny and prompting congressional investigations into the facility.

One detainee currently housed at Irwin told The Intercept that it’s been “business as usual” in the facility since Mayorkas’s announcement of the closure. Benjamin Edetanlen, 43, who has been detained at the facility for almost 16 months and faces imminent deportation to England, confirmed that other people have been transferred into Irwin during the past week but could not specify the number.