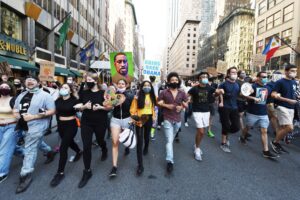 Latinos raised in the U.S. are challenging older relatives who are not as familiar with the nation’s history — and its persistent racism.

MIAMI ­— After growing up with progressive Cuban American parents who eventually divorced, Natalee Rivero was surprised at the reaction of her mother’s boyfriend, who got up during a July 4 barbecue and went inside after seeing Rivero and her husband’s T-shirt that read “Cuban Americans for Black Lives Matter.”

Rivero, 30, tried to have a conversation with her mother about it, “but she wasn’t hearing it,” Rivero said, surprised her mother defended her boyfriend’s reaction.

Around the same time, Sandra Portal-Andreu found herself explaining to her parents why the death of George Floyd was a tipping point for many Black Americans.

“It was an interesting conversation and it was frustrating at times,” said the 41-year-old artist, who felt her parents were being “fed information” that equated the protests over Floyd’s death with violence, looting and antifa.

Across the U.S., the racial reckoning following Floyd’s death has led to uncomfortable and at times heated conversations in immigrant families, where younger generations are pushing parents over stereotypes, assumptions and even outright racism against Black Americans.

Portal-Andreu, born and raised in Miami, said her Catholic high school exposed her to different cultures and made her dreadfully aware of pervasive racism toward Black people. By contrast, her Colombian-born mother and Cuban-born father were less knowledgeable about the buildup to the protests that gripped the country.

After much discussion, she and her parents concluded that though violence is not an answer, “we came to an agreement that protests are necessary.”

Most Americans are only now learning about seminal events in Black history. Despite the fact that the Tulsa Race Massacre was one of the worst outbreaks of racial violence in American history with enduring repercussions, it received little to no attention in U.S. history books or school teachings. Many Americans first heard of it from the recent HBO series “Watchmen.”