Home Resources ‘Nobody Would Tell Me Anything’: Immigrant Parents Struggle To Find Children In U.S. Custody 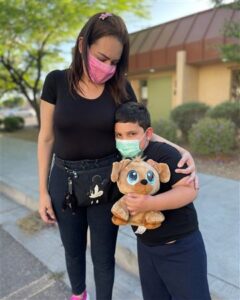 One Guatemalan father in Kansas has called a hotline every night to find out where HHS is holding his two daughters. After weeks, he still has no answer.

PHOENIX — Every night for the past three weeks, after finishing a long day of work, a Guatemalan father of two living in Kansas dials the same number, hoping to find his two daughters. Every night, he’s put on hold, sometimes for more than an hour and half. If he doesn’t give up and eventually reaches someone, he gets the same answer: Be patient.

His daughters, ages 9 and 13, are in the care of the Department of Health and Human Services, or HHS, and they are safe, the hotline operators tell him. But they can’t give out the girls’ location, telling him it is confidential information. Instead, they tell him he must wait for a case manager to contact him to begin the process of bringing them into his home.

“This is a situation that requires waiting, patience and serenity,” the hotline operator told the man in Spanish on Wednesday night.

The interaction only left him more frustrated and upset.

“He says this is how it always goes,” an interpreter for the father said. “He says it’s frustrating, because he’s desperate to find out about his girls, but he can’t get anywhere with this.”

The girls, like nearly 20,000 other children in HHS care, recently immigrated to the U.S. as part of a wave of unaccompanied children that has stretched the limits of the U.S. immigration system.

At the start of this year, HHS was able to match about one case manager to 12 children, but the number of children per manager has shot up as the agency scrambles to hire more people who can look after each child’s welfare and placement in homes with parents or sponsors, an HHS spokesperson said. The spokesperson didn’t provide the current ratio.