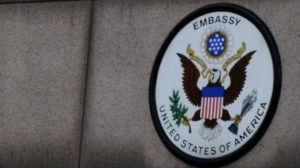 Condemnation and outrage reverberated in most parts of Nigeria after the U.S. President Donald Trump signed a proclamation that suspended issuance of immigrant visa to Nigerians and nationals of several other countries.

The proclamation also suspended overseas issuance of immigrant visas for certain nationals of Myanmar, Eritrea and Kyrgyzstan and Nigeria.

Collins, 30, said his plan to join his brother in the U.S. later in the year has been ruined by the new restriction order.

“I’m angry, frustrated! My hope dashed. I have been preparing for my visa. What should I do now?” he asked. He said he sold his electronics, computers and laptop to raise money for the U.S. visa process.

Over a dozen young men gathered at a newspapers’ stand in the northeast Maiduguri city early Friday morning, debating the new U.S. ban on Nigerians. While some blamed the Nigerian government for the security lapses in the country, others criticized Trump’s relations with African nations.

“Not so at all!,” another interjected as tension rose between them.

“Our government should be blamed,” said 28-year-old Mamman Musa. The cacophonous voice coming from the scene drew more attention and interest from other locals nearby.

Nigerians account for the single largest African immigrants in the U.S. with a population of about 400,000 people, according to the 2016 American Community Survey.