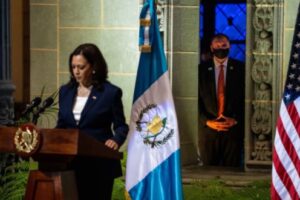 WASHINGTON — Vice President Kamala Harris ended her trip to Guatemala and Mexico Tuesday by repeating something she has been saying for months: Most people who flee Central America for the United States do not want to leave their homes, and would not do so if they felt safe and economically secure.
That is true. But like everything else about her mission to curb migration to the southern border by addressing the fundamental causes, it’s complicated. And the complications are what make her task so daunting, and perhaps unresolvable anytime soon.

Harris, speaking for the administration, proposed increased foreign aid and economic development programs to supplant the remittances that have fueled the region’s economies for generations. Yet many communities in Guatemala, El Salvador and Honduras have depended for decades on family members who send wages earned in the United States back home. Such foreign remittances account for between 14% and 21% of these Northern Triangle countries’ economies, according to 2019 data from the World Bank.

The vice president inevitably must rely on leaders complicit in corruption to help her tackle the problems in their nations. Yet corruption is one of those problems driving residents away, by siphoning money and impeding the delivery of essential services.

And Harris has said her portfolio does not include the bureaucratic and humanitarian mess at the U.S.-Mexico border, yet that’s where the problems are most evident to Americans.

As Harris left Mexico, she asked for patience and understanding. But as domestic controversies demonstrated during her short trip, she may not get it.

Republicans have been attacking her relentlessly for not visiting the border, prompting her to promise in Mexico City that she will go soon. And liberals have been furious that she gave tough warnings to Central Americans not to make the journey north, even as she was acknowledging the conditions driving many to flee.