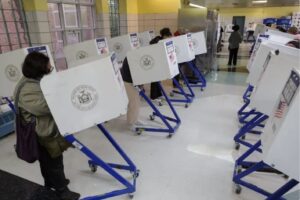 New York City lawmakers are poised to allow more than 800,000 New Yorkers who are green card holders or have the legal right to work in the United States to vote in municipal elections and for local ballot initiatives.

The bill, known as “Our City, Our Vote,” would make New York City the largest municipality in the country to allow noncitizens to vote in local elections.

The legislation, expected to be approved by the City Council on Dec. 9 by a veto-proof margin, comes as the country is dealing with a swath of new laws to impose voter restrictions, as well as the economic and demographic effects of a decline in immigration.

“It’s important for the Democratic Party to look at New York City and see that when voting rights are being attacked, we are expanding voter participation,” said Ydanis Rodriguez, a councilman who sponsored the bill and represents Washington Heights in Upper Manhattan.

The legislation, first introduced almost two years ago, is the culmination of more than a decade of work to gain local voting rights for some legal permanent residents. It also extends the right to those with work authorization, such as the so-called dreamers, recipients of a program known as DACA that shields young immigrants brought into the country illegally from deportation and allows them to live and work here.

It was once more common for noncitizens to have voting rights in the United States, but the provisions were repealed around the turn of the 20th century as more immigrants arrived and popular sentiment changed.

By Jeffery C. Mays and Annie Correal for THE NEW YORK TIMES