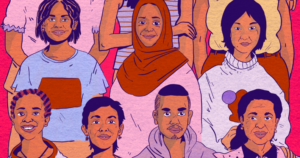 No one should have to face court proceedings in a language they cannot understand, without anyone else there to represent them and protect their rights. Yet this happens every day in immigration courts across the United States. But New York could soon become the first state to establish the guaranteed right to counsel for people facing deportation and ensure fairness in immigration court with the proposed Access to Representation Act.

As of September of this year, among cases that began FY 2020 and later, there were 800,000 pending immigration cases across the United States where people lacked legal representation as they faced deportation. Deportation—separation from family, severance from work, and exile from community and country—is one of the worst punishments a judge can hand down. But the Constitution only guarantees a person legal representation if they appear in criminal court, and deportation proceedings are a civil matter, despite their potentially devastating consequences. This means that people facing deportation in immigration court are not guaranteed an attorney if they cannot afford one.

Immigration law is complex and constantly shifting, and in many cases, people are not even aware of all possible avenues to avoid deportation that are available to them. Asylum seekers, longtime legal residents, immigrant parents or spouses of U.S. citizens, and even children have been forced to try to defend themselves against trained government attorneys in a language they may not even understand. One immigration judge compared presiding over immigration courts to hearing “death penalty cases . . . in traffic court settings.”

Every day, people who could establish legal residency in the United States are deported simply because they do not have money to pay an attorney to help them through the legal processes. People in immigration detention without lawyers prevailed in only 3 percent of their cases, according to one 2018 study. And when people facing deportation do have the money to hire an attorney, they fare much better than those without, regardless of the circumstances of their cases.