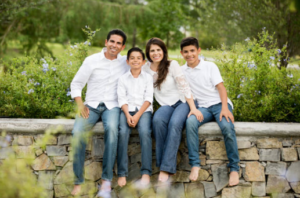 Josselin Contreras and two of her younger brothers were lost and thirsty, wandering alone on the Texas side of the Rio Grande, when Customs and Border Patrol officers caught them in the summer of 2014.

Contreras, then 16, and her brothers, then 9 and 12, had fled El Salvador in the hopes of finding their parents, who had left for the United States with their oldest son a year before to escape gang threats. Now, after a grueling 1,500-mile weeks-long journey, Contreras and her two brothers thought U.S. authorities would finally reunite them with their parents.

Instead, the three siblings were taken to a U.S.-run shelter in San Benito, Texas, where they were held with other children who had also arrived in the U.S. alone.

“I was wondering if the trip was worth it,” Contreras, now 20, said, “because at the end that’s why I did it, to see our parents again and to have a better life. I didn’t know if all of that was going to happen.”

The Contreras siblings were eventually reunited with their parents after about seven weeks in the shelter — but that’s an outcome that could soon become increasingly rare. Immigrant advocates fear a new proposal by the Trump administration will make it more difficult for young migrants to connect with relatives who are already in the U.S., leaving a growing number of children in shelters and foster care.

The proposed Department of Homeland Security rule, which is expected to go into effect after the public comment period ends on Thursday, would allow immigration authorities to examine the criminal background and legal status of anyone who steps forward to sponsor unaccompanied migrant children — usually parents or close relatives already in the U.S. — as well as any other adults living in their home. The rule would also allow Immigration and Customs Enforcement to collect biometric data, such as fingerprints, of the sponsors and other adults in the home.