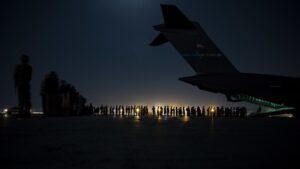 New CBS News/YouGov polling released over the weekend shows overwhelming support for evacuating Afghan translators and other allies to the United States. Overall, 81% responded affirmatively when asked if the nation should “help Afghan allies enter the U.S.” Only 19% opposed.

There was significant support for protecting our Afghan allies across individual party lines, CBS News said. Support was highest among Democrats, at 90%. But support was also high among independents and Republicans, at 79% and 76%, respectively.

“The broad bipartisan support for resettling Afghan allies is part of a broader public opinion trend in favor of immigrants and immigration, which grew stronger during the past four years,” immigrant rights advocacy group America’s Voice said on Monday in response to the polling.

“Trumpian wing of the GOP is loud but not large,” Sharry continued. “Their political efficacy is wildly overrated. They supported Trump’s nationalization of the 2018 midterms on hyped fears of ‘caravans and criminals’ and suffered the largest midterm defeat in American history.