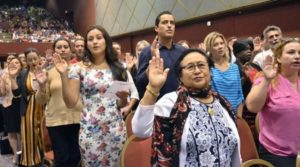 For the first time in decades, more Americans would like to see immigration rise than fall in a pre-election snub to President Donald Trump, a new poll by the Gallup organization showed.

Trump has taken a hard line against both legal and illegal immigration, and the contrary poll results can be traced to his Democratic opposition, according to Gallup, a non-partisan polling company.

It was the first time since 1965 — when it began asking a comparable question — that its poll found those wanting more immigration outnumbered those backing a drop, it said.

“The president is championing slowing down immigration, and obviously Democrats are responding to that,” he told the Thomson Reuters Foundation.

Trump wants to end the so-called Dreamers program that protects immigrants who entered the country illegally as children, as well as build a wall along the Mexican border.

Gallup said its poll found the highest support for expanding immigration since 1965, and that those wanting a decrease had hit a new low.

Another 36% think immigration should stay at current levels.

In 1965, the nation passed the Immigration and Nationality Act that abolished its quota system and ushered in modern-era immigration policies.

The telephone poll was conducted May 28 to June 4, before the Trump administration suspended entry of foreign workers with certain visas on June 22.

The random survey of about 1,000 adults had a margin of error of plus or minus four percentage points.