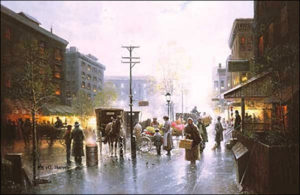 While immigrant rhetoric from US presidential candidates worsens, other countries are forging new immigration policies. According to NBC news Germany is the number one destination for global migrants. Rather than seeking refuge in “the land of the free” migrants are finding a more welcoming climate in the country that was arguably the 20th century’s historically most anti-semi mite, pro Arian government.

Interestingly, as the anti-immigrant sentiment is fueled by boisterous US presidential candidates, Germany is taking a different approach. Across the sea Angela Merkel is making her mark as a pro –immigrant leader. Germany will spend 6.6 Billion dollars as it welcomes 800,000 refugees by the end of this year. According to the BBC 450,000 asylum applicants have filed in Germany this year alone. The US only plans to increase its asylum application cap from 70,000 to 170,000 by 2017 according to the New York Times.

The savvy German politicians see the advantage of diversifying their population with what one expert coined the exceptional people – immigrants. Yet, recent rallies against Germany’s new immigration policy has fueled investigation into xenophobic tendencies as one protester is reported by NPR as having stated that he “regretted the destruction of concentration camps” under the current circumstances.

In all, there is a clear need for the world to address the flow and ebb of immigrants in concert; in a manner that guarantee the inalienable human right to live in dignity, decency and peace.