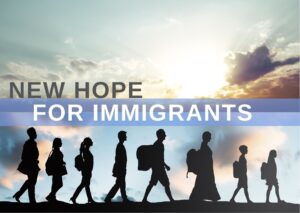 House Democrats have included important new protections for undocumented immigrants in the latest revision of their $1.75 trillion “Build Back Better” bill that was released this week. Most significantly, these provisions would protect immigrants who arrived in the U.S. prior to 2011, by waiving immigration requirements and providing work authorization for up to ten years. These new protections would be available to seven million immigrants who are now in the U.S. without legal status.

This new program would create a temporary status known as “parole” for undocumented immigrants who have lived in the country for a decade; shielding them from deportation and allowing them to work for a five-year period that can be renewed for an additional five-year. These provisions would thus add up to 10 years of protection from deportation and work authorization for those undocumented immigrants.

Reactions to these newly added immigration provisions have been mixed. They have been criticized because they do not go far enough and, particularly, do not provide a pathway to citizenship for the estimated 11 million undocumented immigrants already living in the U.S. Lawmakers supporting immigrants have called on Congress to do more, stating that “we strongly urge Senate and House leadership to act boldly and continue fighting for the broadest legal protections possible to fully unleash the economic might of the undocumented community” Sens Bob Menendez (D., NJ), Catherine Cortez Masto (D., Nev), Ben Ray Lujan (D., N.M.) and Alex Padilla (D., Calif.).

Another area of contention is whether undocumented parolees under this new program should be granted access to government social services and benefits. The current version of the bill neither expressly blocks nor grants access to them. This is likely intentional since many moderate Democrats have constituents whom, while they might support giving undocumented people work permits, would not support providing them with government benefits.

Moreover, Republicans fear that these new provisions would undercut immigration enforcement, with, for example, Rep. David Schweikert (R., Ariz.) noting that “there almost has become a communal understanding that the left keeps making it more attractive to cross the border illegally” and thereby suggesting that these new provisions will only increase the burden on an already overwhelmed border control and immigration system.

On the other hand, immigrant advocacy groups have applauded these new immigration provisions even though they had hoped for more. Todd Schulte, president of Fwd.Us, states that “immigration relief that provides work permits and deportation protections would transform the lives of millions of families who have lived, worked and contributed to this country for at least a decade. It would allow [these] people… basic freedoms, like the ability to work, the security to remain together with their families, and the opportunity to visit loved ones abroad. While short of an explicit pathway to citizenship for all…undocumented immigrants… [if enacted into law] this would be the most significant immigration measure passed by Congress in decades.”

Indeed, despite some limitations and shortcomings, these new immigration provisions would provide significant new opportunities and security, along with the hope for a brighter future, to millions of undocumented immigrants and their families.