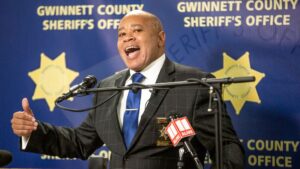 Gwinnett’s new sheriff canceled the county’s participation in a controversial immigration enforcement program early Friday, one of several major changes aimed at retooling the law enforcement culture in one of Georgia’s largest and most diverse counties.

Hours after being sworn in, Keybo Taylor announced that Gwinnett had left the 287(g) program, which deputizes state and local officials to help enforce federal immigration laws in local jails and state prison systems.

Taylor said his office was also disbanding the Gwinnett County jail’s Rapid Response Team, which has been the subject of a federal investigation and excessive force lawsuit.

“Gwinnett County, you spoke and I listened,” said Taylor, who defeated Republican Luis Solis in November.

The new policies represent a sea change for a department that had been run for more than two decades by Republican Butch Conway, who did not seek reelection this year.

Taylor, a retired county police major, is Gwinnett’s first Black sheriff and first Democrat elected to the position since 1984.

On Friday he announced a team of deputies that is majority-minority and unveiled new anti-human trafficking and gang initiatives. Taylor said all were part of a broader commitment to rebuilding trust with Gwinnett’s communities of color.

“You’re going to see a lot of different sheriff office initiatives that are non-law enforcement,” Taylor told reporters. “I think that’s just as important as the mission that we have as far as law enforcement.”

He added, “You’ll see more community involvement … you’ll see a stronger participation with the schools and with our youth here in Gwinnett County.”

One of Taylor’s core campaign promises was to end the 287(g) program, which the Gwinnett sheriff’s office joined in 2009. The program grants state and local law enforcement officials the authority to check the immigration status of arrestees and detain them for the federal Immigration and Customs Enforcement when appropriate.