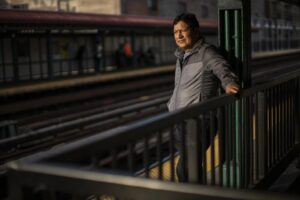 NEW YORK (AP) — The average time for U.S. immigration cases to be resolved is nearly four years. But that’s not the mandate in Francisco Prieto’s courtroom.

The New York judge must attempt to rule within 300 days on dozens of cases he hears daily from families that just entered the country. The migrants are being sent to the front of the line with the idea that others will be less likely to migrate knowing a backlog of more than 1.4 million cases will no longer buy them a few years in the United States even if they lose.

Nearly six months ago, the Biden administration established a “dedicated docket” for families, many seeking asylum, in Prieto’s city and 10 others, including Boston, San Francisco, Miami and El Paso, Texas. It is a modest step aimed at bringing order to the southern border, where authorities this year have faced unusually high numbers of migrant arrivals, including nearly 15,000, mostly Haitians, who camped under a bridge in the small border town of Del Rio, Texas, in September.

Roughly 35 of the country’s more than 530 immigration judges are assigned to the new docket, according to the most recent data provided by the Executive Office for Immigration Review, which oversees federal immigration courts. Many juggle the duties on top of their normal caseloads.

While it’s still early, the effort has made progress: As of mid-September, it was handling nearly 16,000 cases, and more than 100 had received at least an initial decision, according to the agency. It declined to provide more details.

Still, the numbers barely make a dent: Tens of thousands of migrants are released into the country each month, with orders to report to immigration authorities later.

The expedited docket also faces some of the same challenges and complaints as similar efforts under Biden’s two predecessors.