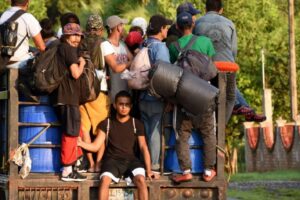 Activist Irineo Mujica, who is currently leading upwards of 1,000 Central and Haitian migrants through the state of Oaxaca, said he’s expecting to meet up with a caravan 10 times larger in nearby Veracruz on November 18.

“We are not going to Mexico City, we are now going the northern border, we are going to Sonora,” Mujica said this week on social media. “For that reason, I am calling on all our migrant peers in Tapachula, in Coatzcoalcos, in Tabasco, in Acayuca […] to gather on the 18th of this month.”

That’s the same date President Biden is scheduled to meet with Mexican President Andres Manuel Lopez Obrador and Canadian Prime Minister Justin Trudeau to talk – among other things – about immigration. The timing could be more than coincidental.

“It seems to me that Mexico is using the caravans as leverage with the United States. Otherwise, the 18,000 Haitians that made it to Del Rio, Texas, would not have made it that far. They were allowed to transit through Mexico and make it to the border,” said Tony Payan, director of the Center for the U.S. and Mexico at Rice University’s Baker Institute.

The September migrant crisis in Del Rio drew international attention as thousands of Haitians, including families with small children, waded across the Rio Grande and formed a gigantic camp under the international bridge. Images of Border Patrol agents on horseback charging to contain the surge went viral on social media.

Lopez Obrador is pushing for the U.S. to ramp up worker visas for Mexicans, many of whom are already trying to cross the border by any means available after being displaced by narco-violence in the countryside in states like Michoacan, Jalisco, Guanajuato, Zacatecas, Durango and others.