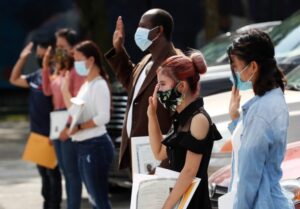 After the presidential race was called for Joe Biden, Lalo Montoya finally felt like he could buy a new couch.

“I had resisted buying a couch, because I didn’t know I was gonna be in this country,” he told Nevada Public Radio’s State of Nevada. “Despite feeling and being American in every way except on paper.”

Montoya is political director for Make the Road Nevada, a nonprofit organization that advocates for immigrants and the state’s Latinx residents. He’s also one of many immigrants in the state who say they are relieved by the outcome of the presidential election — and the end of Trump-era policies they say targeted their communities.

Montoya is a recipient of protections under the Deferred Action for Childhood Arrivals program, or DACA. The Obama-era immigration policy temporarily protects people who were brought to the United States as children from deportation. To qualify, they must pass a background check and have a high school diploma or be currently enrolled in school.

Montoya was brought to the U.S. illegally when he was 2 years old and didn’t learn about his undocumented status until he was in high school.

“It’s been very challenging, the past four years with the Trump administration,” he said.

Montoya’s 11-year-old daughter was excited, too. As soon as the Associated Press called the election for Biden, she texted him, “You can stay now daddy. I’m so happy you can stay.”

According to the U.S. Census Bureau, nearly 20% of Nevada’s population is foreign-born. Noah Montague works with some of those Nevadans as an immigration specialist for non-profit Washoe Legal Services.

Montague says they saw a spike in people looking for legal advice after 2016.

“There was really a fear under President Trump,” he said.

According to a recent Pew study, more than 200,000 undocumented immigrants live and work in Nevada. About two-thirds of them come from Mexico.