Home Resources Nevada Is The First Diverse State To Vote In 2020. Democrats Barely Discussed Immigration In The Debate There. 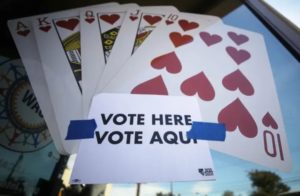 LAS VEGAS — Days before the presidential caucus in Nevada, the first significantly diverse state to weigh in on the 2020 primary, candidates on the stage at Wednesday’s Democratic debate only briefly discussed immigration, amounting to one question followed by immigration protesters drowning out Joe Biden’s closing statement.

Moderators waited until the final 20 minutes of the two-hour debate to ask a direct question about immigration — and when they did, it centered around DACA, the program for young immigrants brought to the US illegally as children which the Trump administration has attempted to rescind, and Democrats have a consensus that they will work to protect and further.

“About 700,000 young people known as DREAMers, or Sonadores, who were brought to this country as children, are currently protected from deportation because of a program that is now under the review by the Supreme Court,” Noticias Telemundo senior correspondent Vanessa Hauc asked Sen. Amy Klobuchar. “If the court sides with the Trump administration, which is eager to end this protection, what exactly is your plan to protect the DREAMers permanently?”

“To win, to beat Donald Trump. The best way to protect the DREAMers is to have a new president. There are the votes there to protect the DREAMers. And I have been working on this since I got to the United States Senate. In my first campaign, I actually had a bunch of ads run against me because I was standing up for immigrants,” Klobuchar replied. She added that the next president should “pass comprehensive immigration reform, which creates a path to citizenship to so many hard-working people, will bring down the deficit by $158 billion, and will bring peace for these DREAMers.”

Pete Buttigieg then challenged Klobuchar over voting to confirm Kevin McAleenan, Trump’s nominee for head of Customs and Border Protection, and for having once voted to make English the national language.