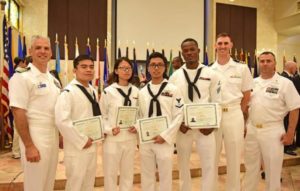 As U.S. Citizenship and Immigration Services prepares to close 19 international offices by next year, the Navy is telling service members to plan ahead and instructing its commanding officers to offer the “maximum support practicable” to meet immigration appointments.

The branch’s guidance, released Thursday, also advises noncitizen service members to work with the Navy Regional Legal Service Offices and follow USCIS procedures. The immigration agency announced in September it plans to close all but four of its 23 overseas offices by August 2020; four offices are closed already and 17 offices will be closed by July 31.

The four remaining USCIS hubs will be at Camp Humphreys, South Korea; Commander Fleet Activities, Yokosuka, Japan; U.S. Army Garrison Stuttgart, Germany; and Naval Support Activity Naples, Italy. They will be open for one week in each quarter of the year, and noncitizen service members stationed abroad and their eligible family members will have to make their own appointments and travel arrangements.

But for noncitizen sailors, the guidance instructs commanding officers to offer the “maximum command support practicable to ensure their presence at required in-person visits to USCIS designated on-site locations.”

USCIS has already begun its quarterly visits to Camp Humphreys and Yokosuka in the first quarter of fiscal 2020, and the visits to Stuttgart and Naples will be held sometime in the second quarter of the year.

Sailors who gain noncitizen dependents through marriage, birth or adoption during an overseas tour are advised to work with the local RLSO and start filing immigration paperwork early, before a permanent change of station move to the U.S. Those sailors, according to Navy guidance, should also enroll the dependent into Defense Enrollment Eligibility Reporting System (DEERS) and file a Form I-130, which is used for lawful U.S. permanent residents to establish a relationship to a noncitizen who’s applying to immigrate to the U.S.