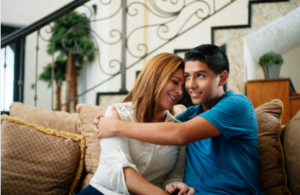 Fleeing an abusive ex-husband in Brazil, Jocelyn and her fourteen-year-old son, James, made their way north last summer. On August 26, 2017, they reached the U.S.-Mexico border near Santa Teresa, New Mexico, just west of El Paso. They crossed the boundary, sought out the first U.S. Border Patrol agent they could find, and gave themselves up so they could seek asylum in the United States. They couldn’t know that they had stumbled into a Trump administration experiment that would later become national policy—the “zero tolerance” approach requiring that all undocumented immigrants face criminal charges and as result be separated from their children.

Jocelyn and James (their attorney asked that only their first names be used) would be separated for more than nine months, she in West Texas and he at a government facility for refugee children in Chicago. They finally reunited Tuesday at El Paso International Airport in an emotional moment that I was invited to witness. Both the Trump administration and its critics say this family’s story is what lies ahead for parents who bring their children illegally into the United States. James took a United Airlines flight from Chicago to El Paso, arriving just after noon on Tuesday. He was accompanied by an official with the Office of Refugee Resettlement, the federal agency that had custody of him for most of the past year. Jocelyn spotted James coming down the escalator and rushed to hug him as he balanced his worldly possessions in a bag on his shoulder. Jocelyn signed a receipt for James, and a mother finally had custody of her son once again.

“I thank God a lot for giving us this opportunity that he is free. It was a long wait, but now he is with us,” Jocelyn, who is about to celebrate her 32nd birthday, said in Spanish. A native Portuguese speaker, she began learning a new language while in immigration detention.