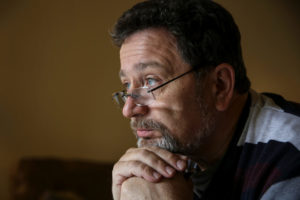 Andrey Federovskiy, a 55-year-old Kazakh man, was arrested in March in one of the largest ICE operations in recent San Diego history, despite having a pending asylum claim.

Federovskiy, who is an evangelical Christian from majority-Muslim Kazakhstan, says he’s being persecuted by the government there, as Maya Srikrishnan breaks down in a new story.

In April, during his first immigration hearing, he discovered the Kazakh government had issued an international warrant for his arrest, over what it says were millions of dollars in unpaid taxes.

ICE said the warrant didn’t play a role in Federovskiy’s arrest – yet the agency touted having captured an internationally wanted criminal in a press release.

Federovskiy says if he’s sent back to Kazakhstan, he’ll be put in prison and won’t come out alive. Now it’s largely up to an immigration court to decide whether he’s being persecuted and deserves refuge in the United States or whether he’s an international criminal on the run.

Federovskiy’s story is in many ways exceptional. The migrants and asylum-seekers who typically make the news aren’t often from Kazakhstan – and they aren’t wanted by their governments.

But in other ways, his situation reveals some of the same issues many immigrants face: the disconnect between different agencies dealing with their cases and how life-and-death decisions can be placed in the hands of administrative immigration courts, where the standards guiding evidence and hearsay are much lower than in criminal court.

The 2018 political campaign has been on summer vacation for the last month and a half, but a handful of new developments have trickled out this week.

Omar Passons, the lawyer who made a strong showing running for county supervisor last month, bringing in nearly 20 percent of the vote without any institutional support, endorsed former Assemblyman Nathan Fletcher’s bid for the seat. Fletcher, a Democrat, will face Republican former District Attorney Bonnie Dumanis in November in a seat long held by Republican Ron Roberts, but where Democrats now strongly outnumber Republicans. Retired fire captain Ken Malbrough, a Democrat, won about 5 percent of the vote, and has endorsed Fletcher as well.