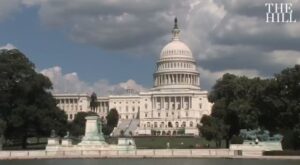 A broad array of local officials from throughout the country called on Democratic leadership and President Biden to include immigration provisions in the upcoming federal budget.

The coalition of mayors, council members, local legislators, school board members and commissioners called for a path to citizenship for essential workers, “Dreamers” who entered the U.S. illegally as children, Temporary Protected Status (TPS) beneficiaries and their families in a letter Wednesday.

“Providing a path to citizenship for these individuals and their families not only recognizes the sacrifices they have made for all Americans over the past year, but also the important role they continue to play in America’s economic recovery and long-term global competitiveness,” wrote the officials.

In the letter, the officials noted that around 5 million undocumented immigrants are estimated to hold jobs deemed essential during the pandemic.

Democrats and advocates estimate between 6 and 11 million people could be granted a path to citizenship in the bill, depending on how the legislation is written.

While the wording of the upcoming budget bill has not been finalized, Democrats are expected to include a pathway to citizenship for millions of undocumented immigrants in their initial proposal.

It’s not yet clear whether all groups of undocumented immigrants will be included, nor to what extent Senate rules allow for immigration benefits to be doled out through reconciliation.

The budget reconciliation rules prevent Republicans from blocking the package with a filibuster, meaning Democrats can win passage in the Senate just on Democratic votes if they are unified. The party cannot afford a single defection.

While the immigration wishlist was expected to be a source of friction between progressives and moderates, it has been a relatively uncontroversial subject, with moderate Sen. Joe Manchin (D-W.Va.) signaling support.

Still, the size of the budget bill, which progressives want to be as high as $3.5 trillion, is hotly debated, and talks on that point could drag other issues onto the negotiating table.