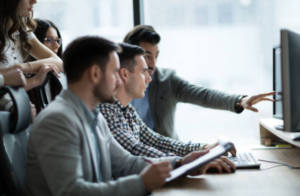 More than 1,000 Google employees have signed a petition as of Monday asking company leaders to declare they won’t work with U.S. immigration and border control agencies, citing mistreatment of asylum seekers and refugees.

The petition calls for Google to withdraw any existing and potential infrastructure, funding or engineering resources for Customs and Border Protection, or CBP, and Immigration and Customs Enforcement, or ICE.

Google did not immediately respond to requests for comment.

The petition, which appeared Thursday, is the latest example of pushback from increasingly vocal employees against Google leaders, who have struggled to balance a values-based culture with lucrative business deals. It comes one year after employee protests caused the company to drop plans for a government contract for a project named Maven, which uses artificial intelligence to identify video images and could be used to improve the targeting of drone strikes. Months later, Google dropped out of the running for the Pentagon’s $10 billion JEDI cloud bid, citing a conflict with its AI values.

Google, along with Amazon, Microsoft, IBM and Oracle, already provide existing cloud infrastructure to CBP, according to a website posting by the agency. The U.S. government states that it is readying a new, long-term cloud contract for a strategy called Cloud Smart, which aims to modernize its legacy systems starting in 2020. This includes IT infrastructure to “streamline CBP work,” according to the posting.

The petition argues that the agencies are responsible for mistreating asylum seekers, separating children from parents and illegally detaining refugees. It also points to 2017 when Google co-founder and Alphabet president Sergey Brin joined protesters in opposition to President Donald Trump’s immigration order.