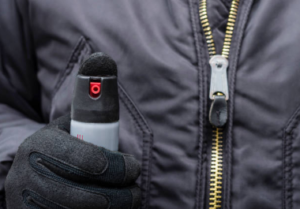 More than 100 detained immigrants across two U.S. Immigration and Customs Enforcement facilities in Louisana have been “subjected to excessive use of force and retaliation” over their participation in hunger strikes, a high-profile immigration advocacy group has claimed.

According to Freedom for Immigrants, as many as 115 immigrants who had been hunger-striking for more than five days at the Pine Prairie ICE Processing Center were subjected pepper-spraying and “shot at” with either “rubber” bullets or pellets shot by an air gun in an incident alleged to have unfolded on Saturday.

In addition to being subjected to “excessive use of force,” the organization claimed that detainees were then “placed in solitary confinement and blocked from contacting their families or attorneys.”

In a phone interview with Newsweek, Freedom for Immigrants Southern regional coordinator Sofia Casini said the photo was shared with her organization by the mother-in-law of a current inmate who came to the U.S. from Cuba.

Casini said it was not clear from the inmate’s description whether he was struck by a “rubber bullet,” which can be fired from a standard firearm or riot gun, or a pellet, a projectile designed to be shot from an air gun.

In a statement to Newsweek, ICE spokesperson Bryan Cox said that most of the allegations of excessive use of force against detained immigrants were false, adding that people who spread false information about ICE do a disservice to the communities they claim to represent.

Cox did confirm, however, that pepper spray was deployed in an incident on Saturday in a decision that ICE maintains is consistent with agency protocol.