Home Federal Enforcement More Than 100 Afghan Children And Teens Are In U.S. Custody Without Parents 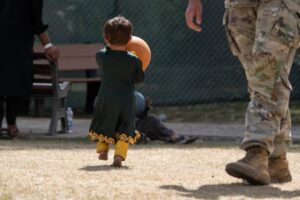 RAMSTEIN AIR BASE, Germany — More than 100 Afghan children and teens are in U.S. custody without their parents after the chaotic crush to flee the Taliban takeover of Afghanistan, federal officials said Wednesday, a number that is expected to rise as more unaccompanied minors are identified among the thousands of evacuees airlifted to safety.

The new figure, a sharp increase from 34 unaccompanied minors who had arrived in the United States as of late August, is in addition to the more than 300 Afghan children and teens the United Nations Children’s Fund (UNICEF) said it had registered this week, mostly in Qatar and Germany. The U.N. agency has said the children were traveling alone or separated from their families as they escaped.

The Department of Health and Human Services’s Office of Refugee Resettlement is responsible for the children’s care in the United States pending reunification with their families, said Jorge Silva, a spokesman for the agency. The new arrivals pose fresh challenges for a system more accustomed to caring for Spanish-speaking minors crossing the U.S.-Mexico border, many of whom have parents or other relatives already in the United States.

Secretary of State Antony Blinken met with some of the 86 unaccompanied minors and young adults here at Ramstein Air Base on Wednesday while he toured a processing center where U.S. officials continue to screen tens of thousands of vulnerable Afghans before they can be resettled in the United States.

My name is Tony,” Blinken told them through an interpreter. “Who’s playing volleyball? What about football?”

“We play everything, sir,” responded Fatella, a 21-year-old woman looking after some of the youngsters at the camp.

Fatella, who declined to provide her last name for fear of endangering family still in Afghanistan, said her father had died years ago and she was separated from her mother in the scramble to leave the Kabul airport.