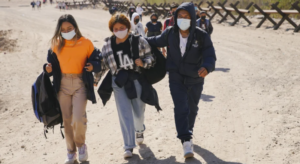 For years after leaving Cuba, the mother of two tried to get her children and parents into the U.S. through legal channels.

Finally, she decided she wouldn’t wait any longer: She paid more than $40,000 dollars to someone to help them sneak in through Mexico.

“I said to myself, ‘Enough. I am going to risk everything,’” said the 30-year-old woman, who spoke to The Associated Press on condition of anonymity for fear of reprisals from U.S. authorities.

Her family’s story is an example of what tens of thousands of Cuban immigrants looking to escape political and economic troubles are going through as more risk their lives and arrive illegally in the United States. It’s a very different reality from years ago when Cubans enjoyed special protections that other immigrants did not have.

Her children and parents undertook a 20-day journey, starting with a plane ride from Havana to Managua, Nicaragua. From there, they took buses, vans and taxis across Honduras, Guatemala and Mexico, until they arrived at the U.S.-Mexico border.

“I saw that other people were coming through the border and they were happy, and I, who had done things legally, was still waiting for my children,” the woman said.

U.S. border authorities encountered Cubans almost 32,400 times in March, according to figures released Monday. That was roughly double the number in February and five times the number in October.

The increase coincided with Nicaragua’s decision starting in November to stop requiring visas for Cubans to promote tourism after other countries, such as Panama and the Dominican Republic, began mandating them.

After flying to Nicaragua, Cubans travel by land to remote stretches of the U.S. border with Mexico – mainly in Yuma, Arizona, and Del Rio, Texas – and generally turn themselves in to Border Patrol agents.

The Biden administration has been leaning on other governments to do more to stop migrants from reaching the U.S., most recently during a visit this week to Panama by Secretary of State Antony Blinken and Homeland Security Alejandro Mayorkas. The actions of Nicaragua, a U.S. adversary, complicates that effort.