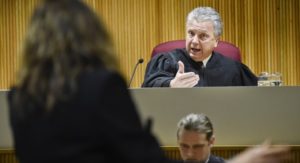 HELENA, Mont. (AP) – The ACLU of Montana is asking the state Supreme Court to rule state law does not allow local law enforcement officers to arrest people for alleged civil violations of federal immigration law. The court did not immediately rule after hearing arguments Wednesday.

The ACLU filed a lawsuit against Lincoln County in October 2018, after Agustin Ramon – a dual resident of Mexico and France – was arrested for stealing prescription medication from a neighbor’s house in Eureka in August 2018.

His bail was set at $25,000, but he did not post bond because the sheriff said he would comply with a Department of Homeland Security request to detain Ramon on their behalf for another 48 hours after any potential release date.

Ramon pleaded guilty to burglary in January 2019, was given a six-year deferred sentence and deported to France. He spent 203 days in jail.

The ACLU is appealing a ruling by District Judge Matthew Cuffe, who rejected a request for a temporary restraining order and an injunction that sought to prevent Lincoln County from detaining Ramon if he posted bond.

Lincoln County argues the case is moot because Ramon is no longer being held.

A similar effort to obtain a restraining order in Gallatin County was denied by District Judge Holly Brown, who said inmate Luis Soto-Lopez hadn’t posted bail so he wasn’t being jailed on the immigration hold. Soto-Lopez then posted his $500 bail on a misdemeanor charge in March 2019 and was quickly turned over to federal immigration officials. Brown then declared the case moot because Soto-Lopez was no longer in the county’s custody. That case was put on hold while Ramon’s case is decided.

The ACLU argued Wednesday the Supreme Court should still rule on the merits of the Ramon’s case because it is of public importance, the same thing could happen to someone else and it is likely to evade judicial review during the 48 hours a suspect could be detained.