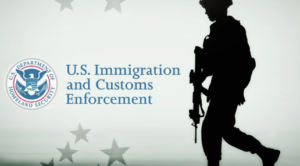 EL PASO, Texas (Border Report) — Members of the U.S. military who are noncitizens will officially have their service used as a mitigating factor when faced with civil immigration enforcement actions.

On Tuesday, U.S. Immigration and Customs Enforcement announced a new policy directive that ensures that its agents take service in the U.S. military by a noncitizen or their immediate family members into consideration when deciding what enforcement action to take.

Titled “Consideration of U.S. Military Service When Making Discretionary Determinations with Regard to Enforcement Actions Against Noncitizens,” the implementation of this directive will provide agency-wide guidance.

The review of each noncitizen’s case will account for the type of discharge, length of service, and other relevant factors in considering U.S. military service. This policy enhancement also creates training, tracking, and reporting requirements so that ICE can collect and maintain data related to current and former noncitizen U.S. service members.

According to an ICE news release, the directive is part of the Immigrant Military Members and Veterans Initiative, which started last year when the Department of Homeland Security joined the Department of Veterans Affairs to provide coordinated support to service members, veterans, and their families.

ICE also said it would continue to focus on apprehending and removing noncitizens who threaten national security, public safety, and border security.