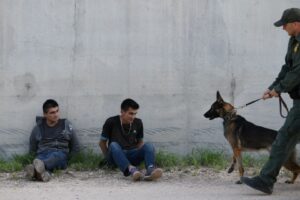 Even as some figures show arrivals at the border are breaking records, a New York-based immigration think tank said the country’s “undocumented population is shrinking”according to census figures.

According to figures in a report by the Center for Migration Studies in New York, there was a 12% decline between 2010 and 2019. In 2010, the population of those in the United States illegally was at an estimated 11.73 million and dropped to 10.35 million by 2019, the report said.

Much of it comes from a drop in Mexican nationals who have voluntarily left, but figures show the country has seen an increase in migrants from Central America and Asia who are living in the country without legal permission. The organization said the figures come from data collected in the American Community Survey conducted by the U.S. Census Bureau in 2019, the most recent year available.

Of the 10.35 million without documents, 38% of them — 3.9 million — are parents of U.S. citizens; 16% are married to a citizen or lawful permanent resident; 59% speak English well, very well or only English; and 96% of those in the labor force are employed, the report said.

“During their increasingly long tenure in the United States, undocumented immigrants have become integral to U.S. communities” with up to 43% residing in the country for 15 years or more, the Center for Migration Studies said.

The report also highlighted staggering inequality in the way of life for individuals who entered the U.S. without legal permission: 20% live at or below the poverty threshold, and half, 50%, do not have health insurance. It also said 40% have less than a high school diploma, and 14% do not speak English.

In “What You Should Know About the U.S. Undocumented and Eligible-to-Naturalize Populations,” the center broke down data to the state and local level.