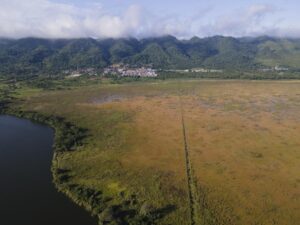 EL CEIBO, Guatemala (AP) — Shortly after crossing the border in south Texas with her 5-year-old daughter, Karla Leiva of Honduras found herself on a chartered U.S. government flight, learning midair that she was headed to the provincial capital of Villahermosa in southern Mexico. Authorities there put her on a bus to Mexico’s southern border and on Thursday she sat on the patio of a migrant shelter in a remote Guatemalan border town.

Her swift expulsion through three countries was part of a highly unusual partnership between the governments of the United States and Mexico that the Biden administration hopes will deter migrants from returning to the U.S. border.

The U.S. government has intermittently flown Mexicans deep into Mexico for years to discourage repeat attempts, but flights that began last week from Brownsville, Texas, to Villahermosa and Tapachula, near the Guatemalan border, appear to be the first time that Central Americans have been flown to Mexico.

The administration is starting flights of Central Americans to southern Mexico 24 times a month, with hopes of ramping up, according to a U.S. official who was not authorized to discuss the matter publicly and spoke on condition of anonymity. Mexico agreed to support the effort amid strains between the administration and Central American governments and their reluctance to accept more flights from the United States.

U.S. Homeland Security Secretary Alejandro Mayorkas, responding to reporters’ questions Thursday at a news conference in Brownsville, made the administration’s first public acknowledgement that it is expelling Central Americans on flights to southern Mexico. The Mexican government has been publicly silent.

Mayorkas said the flights aimed to deter repeat attempts by migrants who are expelled from the United States under pandemic-related restrictions that prohibit them from seeking asylum.