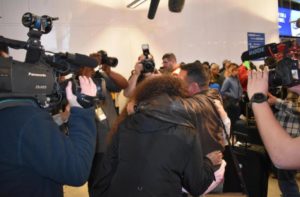 Los Angeles — Nine migrant parents who were expelled from the U.S. after being separated from their children in 2017 and 2018 set foot on American soil once again early Thursday morning in a historic, court-mandated return. Advocates hope the reunions will be the first of several reliefs granted to some of the hundreds of fathers and mothers deported to Central America without their children.

Escorted by a group of advocates, faith leaders and lawyers, the eight fathers and one mother arrived in Los Angeles International Airport in the middle of night, carrying conspicuous smiles fueled by the improbable opportunity to see their children in person for the first time in more than a year and a half.

For many of them, it was the first time in the U.S. outside the treacherous terrain of the southern border, crowded and cold Border Patrol cells and jail-like adult detention centers. It was also their second time on board an airplane; the first being when they sat on a deportation flight with their arms bound by metal shackles.

“I don’t have words to express what I feel. It’s something really big,” Fernando, a migrant father from Guatemala, told CBS News in Spanish after embracing his wife and three young daughters for the first time in about one year and eight months. “We all deserve an opportunity in life. And to all the parents who are watching us, who are separated from their children, have patience, have faith and pray a lot because miracles exist.”

Thursday’s unprecedented return was made possible through a court ruling issued last September by the federal judge overseeing the case surrounding the separation of migrant families by the Trump administration. Judge Dana Sabraw of the U.S. District Court in San Diego ordered officials to allow 11 migrant parents who were unlawfully deported without their children to come back to the U.S. so they could reunite with their kids and pursue their asylum cases in America.