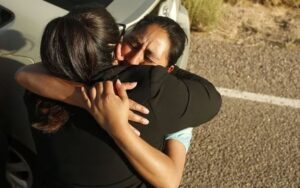 Samayra’s son stopped eating after he was taken from his father at the Texas border in June 2018 under the Trump administration’s zero-tolerance family separation policy.

The boy, who was seven at the time, and his father came to the U.S. seeking refuge after fleeing violence and poverty in their native Honduras.

But after he was sent to a shelter in New York, the boy didn’t know if he would ever see his father again. He survived at the shelter mostly on crackers and juice, said Samayra, his mother.

When the boy was finally reunited with his father back in Texas a month later, the boy was so emaciated, his family barely recognized him, Samayra said.

The trauma didn’t end after the boy and father were reunited and moved to Los Angeles to live with relatives.

He became quiet and withdrawn. He had trouble at school. He couldn’t concentrate on his homework.

“He didn’t have a desire to do anything,” said Samayra, who agreed to an interview provided that her full name not be used because her immigration case is still pending.

He would get up from bed at night after being woken up by terrible nightmares.

When asked what was wrong, the boy would say he had dreamed he was back at the shelter.

“He was afraid he wasn’t going to see his dad again,” Samayra said.

The boy’s troubles show how families separated at the border under Trump’s zero-tolerance policy continue to experience mental health problems as a result of the trauma they endured more than two years ago, mental health experts say.

Despite being reunited, many children and families who were separated continue to struggle with a wide range of mental health problems that include anxiety, depression, trouble sleeping, guilt, fear of separation, and changes in behavior, mental health experts say.