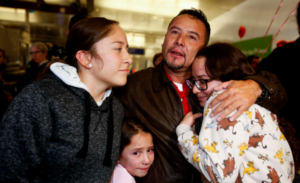 Fernando Arredondo was fighting both his deportation and suicidal thoughts. He had developed a urinary tract infection and hives, lost eight pounds and fallen into a deep depression.

Arredondo was detained at an Immigration and Customs Enforcement facility in Georgia after being separated from his then 12-year-old daughter Andrea along the U.S.-Mexico border, where they had tried to seek asylum at a port of entry following the murder of his 17-year-old son in their native Guatemala.

Because of a court order, Arredondo was able to return to the U.S. in January 2020 to reunite with Andrea, his wife and their other daughters in Los Angeles, where an immigration judge is reviewing the family’s request for asylum. If approved, they will be allowed to live in the U.S. permanently.

But last week, lawyers representing Arredondo and Andrea, now 16, sued the Biden administration, demanding millions of dollars in reparations from the government for their forcible separation and the trauma it caused.

There are now at least 22 pending lawsuits in federal courts across the U.S. on behalf of more than 80 parents and children seeking financial compensation for the trauma they endured after being separated by U.S. border officials during the Trump administration, according to a CBS News review of legal filings.

Last year, the Biden administration agreed to negotiate with lawyers for migrant families seeking reparations to forge a compensation settlement for affected families. But in October 2021, the Wall Street Journal reported that $450,000 payouts were being considered, triggering intense Republican backlash.

Amid the political fallout, the Biden administration in December ended the compensation negotiations.