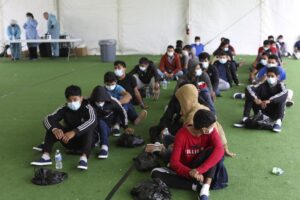 The Biden administration is holding tens of thousands of asylum-seeking children in an opaque network of some 200 facilities that The Associated Press has learned spans two dozen states and includes five shelters with more than 1,000 children packed inside.

Confidential data obtained by the AP shows the number of migrant children in government custody more than doubled in the past two months, and this week the federal government was housing around 21,000 kids, from toddlers to teens. A facility at Fort Bliss, a U.S. Army post in El Paso, Texas, had more than 4,500 children as of Monday. Attorneys, advocates and mental health experts say that while some shelters are safe and provide adequate care, others are endangering children’s health and safety.

“It’s almost like ‘Groundhog Day,’” said Southern Poverty Law Center attorney Luz Lopez, referring to the 1993 film in which events appear to be continually repeating. “Here we are back to a point almost where we started, where the government is using taxpayer money to build large holding facilities … for children instead of using that money to find ways to more quickly reunite children with their sponsors.”

A U.S. Department of Health and Human Services spokesman, Mark Weber, said the department’s staff and contractors are working hard to keep children in their custody safe and healthy.

A few of the current practices are the same as those that President Joe Biden and others criticized under the Trump administration, including not vetting some caregivers with full FBI fingerprint background checks. At the same time, court records show the Biden administration is working to settle several multimillion-dollar lawsuits that claim migrant children were abused in shelters under President Donald Trump.