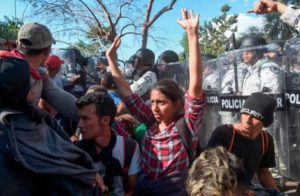 When a group of Central American families forded the Suchiate River into Mexico last week, they were greeted by a wall of national guardsmen who locked riot shields and fired teargas into the crowd.

Questioned about the incident, Mexico’s president, Andrés Manuel López Obrador, dismissed it as “an isolated case” and said such scenes were “not the style of this government”.

The very next day, the national guard once again teargassed migrants near the border with Guatemala. News footage showed women and children howling in distress as guardsmen rounded them up and loaded them on to buses.

The president, generally referred to as Amlo, once railed against the abuse visited on migrants. In opposition, he pleaded for Mexico to provide safe passage to people heading for the US border.

But 13 months into his presidency – and under the looming threat of US tariffs – Amlo has assumed a new role: immigration enforcer.

The president has struggled to reconcile his past rhetoric with current actions, claiming good intentions at every turn, invoking human rights and even citing scripture to call for the proper treatment of migrants.

But Amlo has staunchly defended the national guard, a militarised police force he created last year ostensibly to fight organized crime. Its first deployment was against migrants, even as violence continues to wrack the country.

“The national guard resisted a lot because there was aggression, on the part of the migrants,” he told reporters. “They didn’t fall in the trap of responding with violence, which is possibly what the leaders of these caravans and our political adversaries were looking for.”

Cabinet ministers parroted the same line: “In no way was there an act of repression,” said the interior minister, Olga Sánchez Cordero. “A tragedy was avoided,” said the foreign minister, Marcelo Ebrard.

By David Agren for THE GUARDIAN
Read Full Article HERE