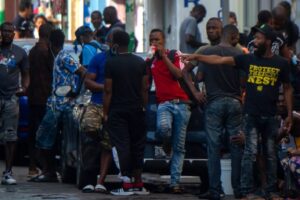 Haitians and their Chile- and Brazil-born children overtake Hondurans as the largest group seeking legal status south of U.S. border.

EL PASO, Texas (Border Report) – The great northward migrant surge of 2021 not only impacted the United States but Mexico as well.

A record-breaking 131,488 people filed refuge petitions last year south of the border, with Haitians and their Chile-born and Brazilian-born children making up the largest group, the Mexican National Refugee Assistance Commission (COMAR) reported on Monday.

That’s an 86.89 percent increase over 2019, when some 69,000 refuge petitions were filed, according to Andres Ramirez Silva, head of COMAR.

Agency officials say Hondurans in the past have filed the greatest number of petitions, but their applications grew only by 20.87 percent in 2021. Refuge applications from Haitians grew by 773 percent, Chileans by 767 percent and Brazilians by 592 percent.

Ramirez said on social media that many Chilean and Brazilian petitioners are the children of Haitians who were living in those countries until recently. He said Mexican authorities have documented more than 10,000 Honduran children, either traveling with family members or coming alone, compared to 6,384 Chilean children, 3,554 born in Haiti and 3,271 born in Brazil.

The large number of refugees has overwhelmed Mexican immigration authorities who this fall released newly arrived migrants to the streets of what activists describe as the “open-air prison city” of Tapachula, near the border with Guatemala. Several migrant caravans set off from Tapachula late this summer and early fall, with some 15,000 Haitians making their way to Del Rio, Texas in September and another caravan breaking through a Mexican National Guard blockade in late October.