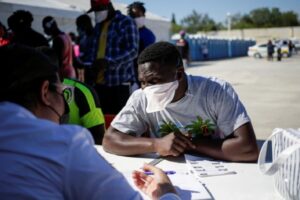 Mexico’s foreign ministry has said the Mexican and US foreign development agencies will work together on a project to address the root causes of migration from Guatemala, Honduras and El Salvador.

Migration from Guatemala, Honduras and El Salvador has fuelled record numbers of people being apprehended at the US-Mexico border, as asylum seekers have tried to enter the United States after fleeing poverty, violence and political instability.

The surge in arrivals has piled political pressure on the administration of US President Joe Biden, whose Republican rivals have accused him of causing “chaos” at the border.

During the last fiscal year, US authorities detained some 1.7 million people along the border.

The US has been increasingly reliant on Mexico to stem the flow of migrants, as it returns to Mexico the majority of people who arrive at the border under a Trump-era border restriction enacted due to the coronavirus pandemic.

The US is also in talks with the Mexican government to restart a programme that would force asylum seekers to wait in Mexico for their US immigration court hearings.

Both Biden and Mexico’s leftist President Andres Manuel Lopez Obrador have vowed to tackle what they call the “root causes” of migration.

They have pointed to poverty, lack of education and job opportunities, gang violence, political instability and corruption as some of the leading causes of migration, especially of young people.

The new US-Mexico collaboration will begin in Honduras, with an effort to teach job skills to more than 500,000 at-risk youth, the Mexican foreign ministry said on Wednesday.