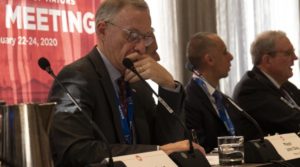 They were Democratic and Republican mayors from cities large and small across the country, but officials on the panel Wednesday on immigration agreed – it’s an issue they all grapple with.

For Mesa Mayor John Giles, the U.S. Conference of Mayors event “reiterated to me that immigration, and immigration reform issues, are not just a state or border city issue. This is ubiquitous throughout the United States.”

Giles and Los Angeles Mayor Eric Garcetti led the session, that touched on everything from the prospects for the DACA program to border policy to the future of a Trump administration plan to stiffen the so-called “public charge” rule for immigrants.

The packed forum on current immigration issues included panelists from United We Dream, the National Immigration Law Center and Center for American Progress.