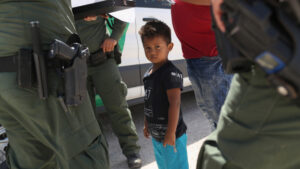 EL PASO, Texas (KTSM) — Freshly released information could help to reunite migrant families separated at the U.S.-Mexico border in 2017 and 2018.

The Trump administration has faced widespread criticism for its family separation policies that have resulted in people being held in “cages,” lost children, and unspeakable trauma compounded by the inherent stress of migration.

“Migrant children and their families experience a great number of stressors throughout their pre-migration, flight, and resettlement experiences that impact their psychological well being,” Angela Barraza, trauma-informed care specialist at the El Paso Child Guidance Center tells KTSM.

According to Barraza, there is a multitude of social, emotional, and cognitive complications that can occur from migrant children being separated from their parents.

A nine-month negotiation process between lawyers for the DOJ and migrant families resulted in an $8 million agreement to provide mental-health screenings and counseling through which thousands of migrants never went.

Last month, sources from the Office of White House Counsel confirmed the Trump administration killed the 2019 deal with the DOJ to provide mental health services for migrant families separated at the border under the administration’s policies.

Wartime violence and combat experience, as well as displacement, malnutrition, and a lack of stability, inhibit a child’s mental health and general well-being.

Migrant children are susceptible to suffer from post-traumatic stress that includes symptoms of reliving the trauma, flashbacks, numbness, hypervigilance, avoidance, and more.