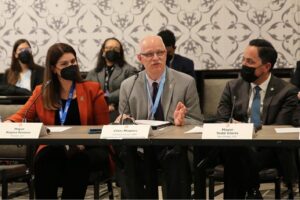 WASHINGTON – Mayors of Tucson and Mesa agreed Wednesday that immigration reform is badly needed to address the current situation at the border, but they are not confident it can get done in the current fractured political climate.

The comments from Tucson Mayor Regina Romero, a Democrat, and Mesa Mayor John Giles, a Republican, who took part in an immigration forum at the U.S. Conference of Mayors meeting in Washington.

“It’s been 30-plus years since we’ve had meaningful legislation related to immigration reform,” Giles said after the session. “We’re hopeful that the people will put partisan politics aside and address this like a bipartisan issue.”

But he and Romero both acknowledged that the climate in Washington will most likely stifle any chance for change.

“I think the major issue facing immigration policy is that it’s not based on facts, the conversation in our country is polarized,” Romero said.

The meeting comes as the number of migrants at the southern border continues to surge, after hitting an all-time high of 1.7 million encounters with immigrants in fiscal 2021, according to Customs and Border Protection data. The numbers have fallen slightly since July, but still stood at more than 338,000 in October and November, the first two months of fiscal 2022, and the latest data available from CBP.

CBP Commissioner Chris Magnus – who until last month was Tucson’s chief of police – told the panel that his agency is struggling to keep pace with the challenges, which include handling asylum-seekers and immigrants, trying to keep trade flowing through ports of entry and fighting a surge in illicit drug trafficking. He said CBP intercepted 1,000 pounds of fentanyl at the border in fiscal 2021, “really a massive increase of what we saw in 2019.”

Magnus said current resources at the border are stretched thin and workers are inundated.