Home Federal Enforcement Mayorkas To Cubans, Haitians: Do Not Come To The U.S. 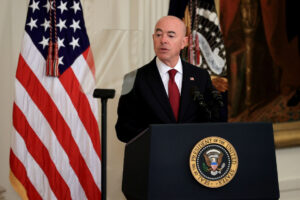 There isn’t a surge in Cuban or Haitian migrants by sea so far, but the U.S. Coast Guard has deployed officials to monitor the situation given upheaval in both countries.

Cuban-born Homeland Security Secretary Alejandro Mayorkas on Tuesday delivered a clear message to the Cuban and Haitian people amid upheaval in both Caribbean nations: Do not come to the United States.

“The time is never right to attempt migration by sea,” Mayorkas said in a press conference at the U.S. Coast Guard Headquarters. “To those who risk their lives doing so, this risk is not worth taking.”

“Allow me to be clear: If you take to the sea, you will not come to the United States.”

Mayorkas’ message comes amid continued protests in Cuba calling for the end of the 62-year-old dictatorship and the recent assassination of the president of Haiti.

The Biden administration has expressed solidarity with the thousands of Cubans protesting on the communist-run island, but so far has not shared any concrete plans or policy to help them. On Sunday, a delegation of U.S. officials traveled to Haiti to discuss the Haitian government’s ask for U.S. assistance following the president’s assassination.

Many migrants attempting to reach the United States by sea have died on the dangerous trek over the years. In recent weeks, 20 migrants have died at sea, Mayorkas said.

So far, the U.S. has not seen a surge in Cuban or Haitian migrants by sea, Mayorkas said. But the U.S. Coast Guard has deployed officials to monitor the situation by air and sea in the Florida Straits and Caribbean Sea, he said.

“Any migrant intercepted at sea, regardless of their nationality, will not be permitted to enter the United States,” Mayorkas said.