Home Politics Mayorkas Says Immigration Crisis Not Unique to US: ‘Reflective of the Economic Downturn’ and ‘Climate Change’ 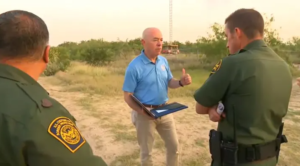 Homeland Security Secretary Alejandro Mayorkas said Sunday that the immigration crisis at the southern border is not unique to the U.S., and that southern countries are also seeing a massive influx of migrants due to the global economic downturn and climate change.

During an appearance on ABC’s “This Week,” Mayorkas was asked by anchor Martha Raddatz whether the Biden’s administration’s policies were working at the U.S.-Mexico border, where Border Patrol agents are reporting a record number of apprehensions of immigrants trying to illegally cross into the U.S.

“I think that we are doing a good job. We need to do better,” Mayorkas responded. “We are focused on doing more, and we are doing it with our partners to the south.”

Mayorkas said the crisis is a global one, and that populations are being driven northward in part due to the flailing global economy, the COVID-19 pandemic, and climate change.

“This is a phenomenon that not only the United States is experiencing – Colombia now has more than 2 million Venezuelans within its borders, Costa Rica has indicated that 2% of its population is Nicaraguan, and that might rise to 5%,” he said.

“The migration that is occurring throughout the hemisphere is reflective of the economic downturn, increase in violence throughout the region, the result of the COVID-19 pandemic, the results of climate change – we’re really in a regional challenge, and we are addressing it with our regional partners,” he added.

Mayorkas’ comments come after the Department of Homeland Security released a report last week showing Border Patrol agents processed migrants who illegally entered the country over 220,000 times in May, setting an all-time record.

The dangers people are risking to get into the country came into full view last week after 53 migrants were killed in a tractor-trailer that had been abandoned in the sweltering heat outside San Antonio. At least four suspects have been arrested in connection with the case.