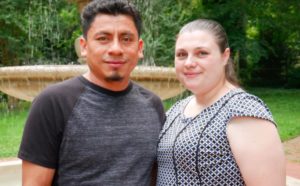 A federal judge in Maryland has issued a preliminary injunction blocking Immigration and Customs Enforcement from sweeping up immigrants who are in the process of obtaining legal status through a U.S. citizen spouse, and has ordered the release of anyone currently detained under that process, the American Civil Liberties Union of Maryland said. While the ruling applies only within Maryland, it’s nevertheless a win for families and advocates who have condemned ICE’s “bait and switch” tactic of arresting people who are following the rules by showing up for their immigration appointments.

“This is an important victory in the Sanchez v. McAleenan case, a class action brought by six families challenging ICE’s practice of arresting people when they show up for interviews required as part of the legalization process, in violation of ICE’s own regulations,” the ACLU of Maryland said in its statement. “The order protects anyone with upcoming marriage interviews, and orders the release of anyone in ICE’s custody who has been victimized by this cruel practice.”

One of the plaintiffs named in the lawsuit, a Honduran man who has been married to a U.S. citizen since 2013, was detained by ICE agents “moments after he and his wife successfully finished their interview with an immigration officer in Baltimore,” The Baltimore Sun reported. Elmer Sanchez would remain in federal immigration detention for another six weeks, where, he said in an ACLU of Maryland video, he witnessed officers trying to force immigrants to sign documents agreeing to their own deportation.

Similar litigation is also ongoing in Massachusetts. Among the plaintiffs named in the ACLU of Massachusetts’ lawsuit is Lilian Calderon, who was detained in 2018 when she and her U.S. citizen husband showed up for their interview. The mom of two was jailed for weeks and was nearly deported, until a federal judge intervened. “My daughter, a few days after this happened, she asked me why mommy left. How come her friends have a mom and she doesn’t,” her husband said at the time. “And that’s very hurtful because that’s not the facts. She never left us. She was taken from us.”