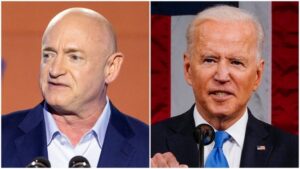 Democratic Sen. Mark Kelly (Ariz.) criticized President Biden for not laying out a comprehensive plan to address the recent surge of migrants at the southern border during his first address to a joint session of Congress on Wednesday.

“While I share President Biden’s urgency in fixing our broken immigration system, what I didn’t hear tonight was a plan to address the immediate crisis at the border, and I will continue holding this administration accountable to deliver the resources and staffing necessary for a humane, orderly process as we work to improve border security, support local economies, and fix our immigration system,” Kelly, who is up for reelection next year in a swing state along the border, said in a statement following Biden’s speech.

Biden, near the end of his remarks, called on Congress to “end our exhausting war over immigration.”

“For more than 30 years, politicians have talked about immigration reform and we’ve done nothing about it. It’s time to fix it,” the president said. “Now look, if you don’t like my plan, let’s at least pass what we all agree on. Congress needs to pass legislation this year to finally secure protection for Dreamers, the young people who have only known America as their home.”

Biden has laid out a plan to grant asylum to some 11 million undocumented immigrants currently living in the United States.

“Look, immigrants have done so much for America during this pandemic and throughout our history. The country supports immigration reform,” he said. “We should act. Let’s argue over it. Let’s debate over it. But let’s act.”

Republicans have said Biden’s proposed policies and rollback of Trump-era crackdowns are responsible for a recent surge of migrants to the border, resulting in the mass detention of thousands of migrant children at various border facilities.

By Dominick Mastrangelo for THE HILL
Read Full Article HERE