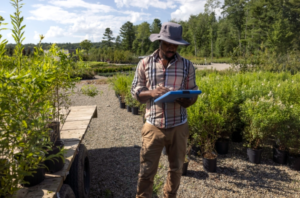 A shortage of skilled labor is stifling growth and hurting operations, to the extent farmers have trouble planting and harvesting crops and caring for livestock, they say.

“We make decisions every day about what we will harvest and what we will leave,” said Penny Jordan, owner of Jordan’s Farm, a vegetable grower in Cape Elizabeth. For the last three years, Jordan has had three or four full-time field hands trying to do work that ordinarily takes six or seven people to do, she said.

A bill pending in the U.S. Senate could help relieve labor pressures that farmers in Maine and elsewhere are facing. Last year, the House passed the Farm Workforce Modernization Act, a bill that would provide a path to citizenship for undocumented agricultural workers, reform a widely-used seasonal farmworker visa program and hold employers accountable for using documented labor.

Jordan and other farmers spoke about the need for the reforms during a media event at Pierson Nurseries in Dayton on Thursday.

Supporters of that measure are eagerly awaiting a Senate version being negotiated by Sens. Mike Crapo, R-Idaho, and Mike Bennet, D-Colorado. Approving the bill this year could ease farmers’ labor challenges and ease soaring food costs, they said.

An overhaul of U.S. immigration laws has been needed for decades, but the pressures facing agriculture are multiplying during a tight labor market nationwide, said Jim O’Neill, director of outreach at the American Business Immigration Coalition, a national group that lobbies for immigration changes on behalf of private industry.

“This is an issue that is not new but has been more desperate in recent months and is really at a tipping point,” O’Neill said.