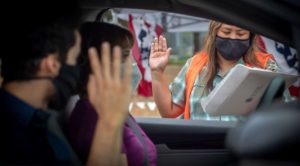 Trump’s ghoulish exploitation of the coronavirus pandemic to further his anti-immigrant policies has also manufactured a crisis at the federal agency responsible for green cards, citizenship, asylum and myriad other immigration matters. U.S. Citizenship and Immigration Services (USCIS) is about to run out of money, and if Congress doesn’t act, will furlough more than two-thirds of the USCIS workforce in August. Such a shutdown would further extend the “invisible wall” Trump created to suppress immigration of all kinds. In an election year in which Trump seems determined to use every tool of voter suppression possible, the shutdown of USCIS could mean hundreds of thousands of potential new voters may be denied the ballot.

Trump’s policy changes pre-pandemic were already creating staggering wait times at USCIS, a problem that received congressional scrutiny. But coronavirus, combined with Trump’s exploitation of the crisis to shut down immigration even further, is not only exacerbating the backlog, but is also leading to a 50 percent decrease in fees beginning in March. This has left USCIS, which is almost entirely funded by fees paid by immigrants, in need of a $1.2 billion bailout. Without it, the agency says it will be forced to furlough nearly two-thirds of its entire staff (13,400 of 20,000 employees) on August 3.

When Trump took office, USCIS had a surplus. Less than three years later, the agency finds itself in crisis. Observers of USCIS believe the funding crisis, although exacerbated by coronavirus, is due to mismanagement. Trump repeatedly raided USCIS to fund Immigration and Customs Enforcement (ICE): In 2019 and 2020 USCIS transferred $415.2 million total in revenue to ICE. Under Trump, USCIS enacted a slew of new policies and regulations that both suppress immigration and divert resources and money. For instance, changing regulations regarding who is considered a “public charge” to prevent people from becoming green card holders, suspending Deferred Action for Childhood Arrivals (DACA), and eliminating Temporary Protected Status (TPS) for hundreds of thousands of people unable to return to their country of nationality due to armed conflict or natural disaster.